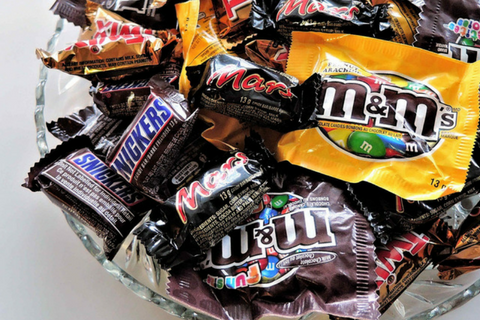 Each week we analyse some of the hot headlines in health and nutrition news. This week we look at a new ‘Change4Life’ campaign on children’s snacks and the link between processed meats and breast cancer.

Popular in the news this week is the new campaign being launched to encourage healthier snacking in children. This has been reported widely, including the BBC, Sky News, The Telegraph, ITV News, the Sun and The Guardian.

Figures have shown that half the sugar consumed by children in England aged 4–10 comes from unhealthy snacks such as biscuits, cakes and sweets, as well and fizzy and juice drinks.

Public Health England (PHE) have launched a new ‘Change4Life’ campaign promoting children’s snacks which are no more than 100 calories. They also advise cutting number of snacks down to twice per day.

The campaign will run for eight weeks and offers money-off vouchers if parents sign up for lower-sugar snacks. Selected supermarkets including Tesco are supporting the campaign.

The Change4Life ‘Food Scanner’ app has also been updated and improved, showing parents the amount of sugar, salt and saturated fat in their food.

Behind the headlines: the Nutrilicious dietetic view
According to the latest National Diet & Nutrition Survey (NDNS), 4–10 year olds consume on average 53.5g free sugars daily – equivalent to 13 teaspoons. Unhealthy snacks and sweet drinks contribute to at least half this daily intake – equivalent to around 7 teaspoons per day.

We discussed the need for free sugars to be limited for children in a previous blog. Improvements must be made in this area and we sincerely hope this campaign can make a difference.

The scale of the problem
According to the new analysis by PHE, every year each 4–10 year old consumes on average 400 biscuits; more than 120 cakes, buns and pastries; around 100 portions of sweets; nearly 70 of both chocolate bars and ice creams; plus over 150 juice drink pouches and cans of fizzy drink.

As these products are predominantly energy dense with few nutrients on offer, looking at the total calorie contribution per year makes the latest findings even more alarming:

The campaign to change habits
A simple ‘rule of thumb’ advice is being promoted by the campaign to help make it easier for busy families to reduce the intake: ‘look for 100 calorie snacks, two a day max’.

It should be noted that the advice does not focus on fruit and vegetables. A variety of these should be encouraged, aiming for a minimum of five portions per day.

Examples of snacks that fall at or below 100 calories include:

The packaged snacks should also ideally show as greens and ambers on the ‘traffic light’ labelling system (indicating they are not too high in sugar, fat, saturated fat or salt). More information on food labelling is supplied by Change4Life.

It is also useful to check on the label that the portion consumed is what the label portion actually relates to. For example, a large pack of crisps may display the calories for 1/8 of the packet but it can be easy for a child to have more than this portion.

What’s missing from the advice
Although it is positive that action is being taken to promote healthier snacking, the campaign only focuses on the role of calories and may not necessarily teach parents about what makes up a healthy snack.

For example, a handful of nuts would contain more than 100 calories, yet nuts are a nutrient dense food and have many benefits to our health. Snacks can contain less than 100 calories but not contain any valuable nutrients, as in the case of many cereal bars. So, it is questionable how well this campaign will educate parents about healthy eating.

Nevertheless, if improvements can be made to the current eating habits in children it will be beneficial.

Also in the news this week is the suggestion that eating processed meats will increase the chances of getting breast cancer. This was picked up by the Sun, the Daily Mail, the Evening Standard and the Independent.

The study involved 262,195 women aged 40–69, followed over a period of seven years. For this cohort, a 21% increased breast cancer risk was associated with women consuming more than 9g processed meat per day.

However, when the study was combined with another 10 cohort studies and a meta-analysis performed, the risk was significantly lower.

Behind the headlines: the Nutrilicious dietetic view
The study looked at a variety of processed meats, but clearly the UK headlines are pulling at the Brits’ heart strings by focusing on bacon and sausages.

Firstly, what counts as processed meat? Processed meats are defined as meat which has been preserved through salting, curing, fermentation, smoking or other processes. Examples include sausages, bacon, ham, salami, chorizo, corned beef, hot dogs and pepperoni.

This study adds further supports to one of the key messages for cancer prevention to avoid processed meat and reduce overall intakes of red meat (no more than 500g per week) whilst focusing on a more plant-based diet.

In order to truly help women reduce their risk of breast cancer, messages like this, focusing on one food type, are not helpful. Study findings should be placed in context of overall dietary and lifestyle advice proven to lower risk as well as regular breast screening checks. This study only found correlation in post-menopausal women and only reported on processed and red meat findings.

With 50,000 new cases of breast cancer every year in the UK, 20,000 of which could be prevented through dietary and lifestyle modifications, there are far more pertinent actions women can take. The World Cancer Research Fund (WCRF) highlights the following as major risk factors for breast cancer:

Although this study further supports the evidence that processed meat isn’t great for women’s health (or, indeed men’s health), we need to stop scare-mongering and instead provide helpful advice to women concerned about the UK’s number one cancer. Scientific findings need to be put into context and then interpreted into practical and helpful advice for consumers.

As well as the lifestyle recommendations by WCRF, it is also important to continue encouraging women to regularly check their breasts for lumps and seek medical assistance if they have any concern as well as attend any breast cancer screening invitation from their health service.