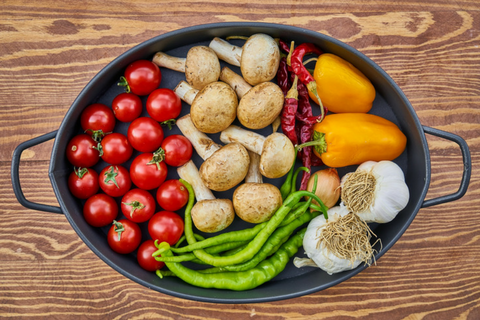 The rise in popularity of vegetarian and vegan diets is in the news, including stories in the Daily Mail INews. This comes following a release by Kantar Worldpanel of supermarket sales figures and analysis of consumer behaviour. It revealed:

Announcements of product sales and ranges underscore these figures. In just two examples, it was also reported in the news this week that sales of Quorn (a meat substitute product) have increased globally by 16%. Last month also saw Tesco bring out their own vegan range, Wicked Kitchen, highlighting the increasing demand for more plant-based options.

There are many reasons why we could be seeing an increase in the popularity of meat free meals.

Richard Allen, a spokesman for Kantar Worldpanel, emphasised increasing access to meat-free foods: “The surge in vegetarian evening meals over the past year is down to the wider availability of products which make eating meat-free more attractive and practical.”

He continued: “Our ideas about what’s healthy are also changing – we’re more focussed on foods that are natural and less processed and eating a varied diet.”

What are the benefits of a plant-based diet?

Benefits of adopting a more plant-based diet include:

Does this mean meat is off the menu?

Gaining the benefits of a plant-based diet does not have to mean a diet no with meat at all. A ‘flexitarian‘ diet is predominantly plant-based without completely eliminating meat and can be extremely beneficial for health and reducing carbon footprints.

Indeed, meat, poultry and fish are nutritious foods and can provide a range of nutrients beneficial for health. We are advised by the NHS to have two portions of fish per week, one of which is oily. They also advise how meat can fit into the diet.

We welcome findings that plant-based meals are being explored and becoming more popular. We encourage everyone to enjoy a varied diet featuring a wide variety of plant-based whole foods.

Overall, plant-based eating isn’t new. It’s not radical. And it’s definitely not about cutting things out. A plant-based diet shouldn’t be defined by what it excludes, but by what it includes. The core message is ‘put plants first’. Instead of planning meals around meat, bring veggies, fruits, whole grains, pulses, legumes, nuts and seeds from the side of the plate to front and centre.

It doesn’t have to be wholesale change: many benefits can be achieved by simply reducing intake of meat rather than following a strict vegetarian or vegan diet. We recommend making small steps to include more plant-based foods and meals in your diet, to benefit your health and the planet.

If you do decide to go further, the NHS gives advice on ensuring a vegetarian or vegan diet is balanced. The British Dietetic Association are part of an important alliance with the Vegan Society to share the message that all well-planned vegan diets can support healthy living in people of all ages.