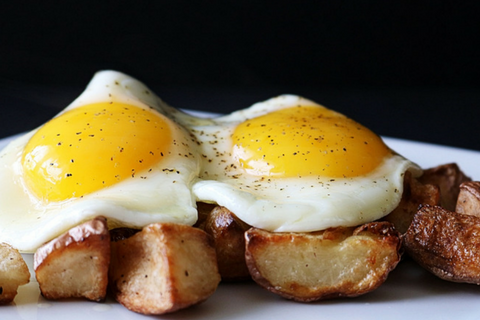 Each week we analyse some of the hot headlines in health and nutrition news. This week we look at the role of choline in pregnancy, the health aspects of coconut oil and whether sleep can help us cut down on sugar.

The effect of choline during pregnancy has been in the news this week, reported by the Independent, The Times, the Daily Mail and the Mirror.

This is based on a small study of 26 women entering their third trimester of pregnancy, who were randomised to consume either 480mg or 930mg choline supplement in addition to a controlled diet.

Babies were tested at 4,7,10 and 13 months of age and it was found that reaction time was significantly faster in babies of mothers who consumed 930mg choline supplement daily.

Behind the headlines: the Nutrilicious dietetic view
We don’t hear of choline, which is a vitamin-like nutrient needed for the normal function of all cells, especially those in the liver and the central nervous system, including the brain.

Although choline is an essential nutrient, this study is a long way off proving that pregnant women need to focus on choline supplements to improve their children’s cognition, much less that fry ups result in intelligent babies:

Eating a healthy balanced diet, maintaining a healthy weight gain, keeping active and avoidance of alcohol and smoking during pregnancy will help ensure the best outcomes for the mother and the baby. Specific supplements of vitamin D and folic acid are also recommended by UK government. For tips on a healthy diet see the NHS

HEADLINE 2: IS COCONUT OIL A SUPERFOOD?

This week Dr Michael Mosley has been promoting the use of coconut oil as a health product, as picked up by the BBC, The Times and the Daily Mail. The suggestion is that despite high levels of saturated fat, coconut oil might still be good for you.

This report comes from the ‘Trust Me I’m a Doctor’ team, a new BBC series featuring Dr Mosley. 94 volunteers were involved, aged between 50 and 75 years, with no history of diabetes or heart disease. They were split into three research groups and for four weeks added to their diet as follows:

Baseline measurements were taken for blood lipids, including LDL (‘bad’) and HDL (‘good’) cholesterol. The findings, averaged out, were as follows:

Behind the headlines: the Nutrilicious dietetic view
This is a disappointing well-publicised study that will only serve to fuel consumers’ confusion about how they can reduce the incidence of UK’s number 1 killer, heart disease.

On the surface, the findings paint the picture that coconut oil could be good for the heart, through raising levels of HDL cholesterol.

However, conducted over only a short period of time, overall diet quality of the participants was not assessed – including overall saturated fat, free sugars and refined carbohydrate intakes from other food sources. Based on this, it is unclear what brought about the changes in lipid profiles and no conclusions can safely be made on the benefits or harmful effects of coconut oil.

Contradicting studies
While this study fuels the growing trend for coconut oil, it cannot compare to the extensive scientific literature reviews of good-quality studies by leading heart health and academic experts. These have shown consistently that saturated fats have an overall negative effect of increasing LDL cholesterol.

We discuss the different types of saturated fats found in coconut oil amongst other key points in our blog, Is Coconut Oil Really Good for You?

What are the current recommendations for use of coconut oil?
Here are what some of the major health organisations have to say about coconut oil:

We need to promote good quality science, which is the basis for international and national guidelines with regard to saturated fat. These included reductions in saturated fat (a maximum of 20g and 30g daily for women and men, respectively), inclusion of unsaturated fats, replacement of refined carbohydrates with whole grains, minimising intakes of free sugars and increasing our fruit and vegetable intakes.

Two level tablespoons of coconut oil provides 19g of saturated fat and is therefore not considered a healthy choice for regular consumption. As part of a balanced diet, coconut oil is fine to have in small quantities.

We look forward to seeing the latest extensive review of research undertaken by the Scientific Advisory Committee on Nutrition, due to be published by March this year.

The Telegraph (Sleep yourself slim: how an extra 90 mins in bed can stop sugar cravings), The Times, the Sun and the Daily Mail (How 20 minutes’ extra sleep could help you say no to cake) have reported on the impact sleep could have on sugar intake.

A study involved 42 participants with poor sleeping habits (deemed as having typically between five and seven hours sleep per night), who were encouraged to follow a personalised sleep extension protocol. The body mass index (BMI) of each participant was between 18.5kg/ m2 to less than 30kg/m2. They each kept food diaries.

Over the four weeks, the intervention group extended their time in bed by 55 minutes on average and their sleep duration by 21 minutes compared with the control group.

On average, there was a reported 10g reduction in intake of free sugars compared to the control group. BMI did not change in the four-week period.

Free sugars are all the different types of sugar we have in our diet, excluding the sugars found naturally in intact fruit and vegetables, milk and milk products. 10g of free sugars is equivalent to 2.5 tsp of sugar, 1.5 tsp of honey, 90ml of cola or 110ml of fruit juice.

Behind the headlines: the Nutrilicious dietetic view
Once again, this study was only of a small number of people and for a short period of time. It was not designed in a way to accurately assess dietary intake, so we cannot be confident that improved sleep patterns will cause a reduction in sugar intake. Food diaries rely on the honesty of the patient and are not necessarily accurate.

Is there a link between sleep and body weight?
Some of the news outlets gave the impression that extra sleep will cause weight loss, but this was not found.

However, the NHS does recognise that sleeping less may contribute to weight gain, highlighting previous studies showing that people who sleep less than seven hours per day are 30% more likely to be obese than those who sleep for nine hours or more.

Sleep is important for mental and physical health and evidence for its role in weight loss/obesity is growing. The NHS recommends seven to nine hours a night. Find out more about ways to get a good night’s sleep.